One day in January, my client was very surprised to learn he was being charged with the crime of Theft in the 3rd degree.

This was a "cold charge," and he was unaware he was being investigated by the Clark County Sheriff's Office for an incident that had occurred three months earlier. This blindsided him, to say the least. What was the most upsetting for him was that the charge was based solely upon supposedly being "identified" by a deputy sheriff from a photo taken from store security video.

This deputy notified the deputy assigned to the case that he thought the guy in the photo was my client. The assigned deputy obtained a photo of my client and photographs of five other randomly selected guys, and created a montage to present to the store clerk for possible identification. Upon being shown the montage, the store clerk picked my client from the lineup with "80% certainty."

Now, remember prosecutors have to prove guilt "beyond a reasonable doubt." And the store clerk was only 80 percent certain.

Earlier this year, our office moved from downtown to Uptown. Typically when giving directions to our office we use local landmark businesses such as Vancouver Pizza Company or Main Street Marijuana. But since the sidewalk in front of our office, at 23rd and Main streets, will soon be home to the city's newest public art installation, we can just tell people to look for 'The Kraken.'"

Today, we got a sneak peek at the piece that was selected through a joint effort by the Clark County Arts Commission and the Uptown Village Association. It's a tentacle that will appear to snake up out of the sewer, as a manhole cover will be affixed to the top. We were also given a image of what it will look like when it's installed. 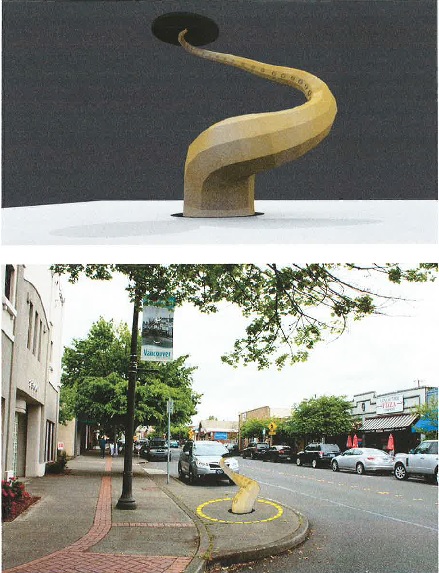 A defense win by default

Clients often ask, “What happens if the victim doesn’t show up for trial?”

Typically, a prosecutor would ask a judge, before jury selection, to set a new trial date. If a client’s constitutional right to a speedy trial was about to be violated, the prosecutor could ask for the case to be dismissed “without prejudice,” meaning the charges could be re-filed and everything would start over.

But those scenarios assume the prosecutor understands the rules.

On July 15th, attorney Katie Kauffman had a domestic violence assault case dismissed “with prejudice,” meaning prosecutors can’t refile charges. Kauffman went to Clark County District Court that day prepared to argue a very strong case.  Her client has no criminal history and was charged with assaulting her husband upon learning that he had been unfaithful. Her client said her husband pinned her down and she only struck him in self-defense. Kauffman was confident a jury would find that there was reasonable doubt that her client was the primary aggressor, and that her client had every right to defend herself and should be found not guilty.

The unique challenge of representing clients who are mentally ill

A recent front-page story in The Columbian, "Defending the mentally ill: Balancing the scales" featured one of our attorneys, Christie Emrich.

"Christie Emrich, an attorney with Vancouver Defenders, knows all too well the challenges that come with defending a client who suffers from a mental illness.

'The deterioration of the human condition is just awful,' she said. 'We see a lot of young clients who develop mental health issues as they enter adulthood. Mental illness can be a fluid thing. You can be healthy and happy and then hit a catalyst and spiral out of control.'

Emrich has represented clients in Clark County's Mental Health Court in District Court off and on since 2006. She said these clients present a unique challenge as they maneuver through the criminal justice system, especially if they don't qualify for the specialty court."

Emrich, and other attorneys at our firm, have a wealth of experience representing clients who are mentally ill. Our attorneys understand how to request mental evaluations from Western State Hospital, advocate for treatment and work with prosecutors to explore alternative sentencing options.

WHEN “HE-SAID, SHE-SAID” IS NOT ENOUGH TO CONVICT

As a criminal defense attorney, it is not my burden to prove my client is innocent. It is the prosecuting attorney’s burden to prove my client is guilty beyond a reasonable doubt. This simple, yet fundamental, fact is critically important when the prosecuting attorney fails to put forth sufficient evidence at trial to justify a guilty verdict. On June 11, 2015, a Clark County jury held the prosecution to its burden and found my client not guilty of assault in the fourth degree—a gross misdemeanor that carries a maximum potential penalty of 364 days in jail and a $5,000 fine.
The case was a classic “he-said, she-said.” The evidence was 50/50, which, in a criminal case, is insufficient evidence for a jury to convict. The prosecution failed to satisfy its burden of proof in two main ways: (1) the prosecution did not have any evidence to corroborate their story; and (2) the prosecuting attorney did not call all available witnesses to testify at trial.
On November 11, 2014, my client’s wife called the police, alleging that my client had assaulted her. My client’s wife alleged that my client hit her on the right side of her head multiple times, pulled her hair, slapped her hands and arms caused bruising, put her in a choke hold and pushed her down on the ground. However, when officers arrived, they did not observe any visible injuries—no marks on her head, no redness on her neck, no bruising on her hands and nothing wrong with her hair. The officers did not take photos of her (which is common practice in assault cases). Furthermore, she claimed my client struck her repeatedly on the right side of her head… but my client is right handed, meaning if he did strike her with his dominant hand, the blows would have landed on the left side of her head. When the officers spoke with my client, he adamantly denied ever striking or touching his wife in an assaultive manner. In sum, my client’s wife’s story was entirely uncorroborated by any physical evidence. Nevertheless, the officers arrested my client and charged him with assault in the fourth degree.

While the rest of the nation is rightfully talking about today's Supreme Court ruling  upholding key provisions of Obamacare, we took notice of an opinion issued by the Washington Supreme Court, State v. E.J.J., that reinforces that speech alone cannot be considered obstruction.

The case concerns a minor -- identified in court documents only by his initials -- from King County who was convicted of obstruction of justice. The conviction was upheld by the Court of Appeals, but reversed by the state Supreme Court, which decided the juvenile was only exercising his First Amendment right to freedom of speech.

As Justice Charles W. Johnson wrote in the majority opinion, police officers were called to the juvenile's home because his sister, also a juvenile, was intoxicated and out of control. Officers removed E.J.J. from the home as they tried to calm his sister, and "E.J.J. grew concerned when he he saw an officer reach for what he perceived to be a nightstick."

The Right To Defend Property Prevails

On May 8, 2015, a Clark County District Court jury found my client not guilty of assaulting the mother of his two children. The jury heard testimony from the alleged victim, who stated she went over to my client’s home to drop off their 2-year-old twins for a visit. The alleged victim did not live at the home. Her name had never been on the lease. Once inside the home, the alleged victim began arguing with my client and accusing him of not properly watching the children. My client asked the alleged victim numerous times to leave his home. She refused.

On June 8 a client of mine was found not guilty of DUI and reckless endangerment. The Clark County District Court jury deliberated for 45 minutes before concluding that the prosecution did not meet its burden of proof beyond a reasonable doubt.

This case was contentious for a number of reasons.

The officer who charged the case indicated that he witnessed my client’s vehicle pulling into a parking space late at night. The business that owned the parking space was closed. The officer was concerned about what the vehicle was doing there and decided to investigate. Upon contacting the driver of the vehicle, the officer was concerned that she may have been drinking and conducted a DUI investigation. The officer’s partner noticed her toddler in the back of the vehicle in his car seat. After my client was arrested for DUI, she refused to take a breath test.

When I first met with my client, she laid out her side of the story. She is a single mother and full-time student. The day of the incident was her birthday. She and her son had gone to a small gathering of friends to celebrate her birthday. Other children were present and her intention was to stay the night. When she arrived at the house, there was no parking available. She was asked by the host to park in the lot across the street. After eating, and drinking a few beers, an argument arose between her hosts, and she did not feel comfortable staying the night. She knew that she was not OK to drive, but a sober person at the party told her that she would drive her, her son and her car home. My client returned to the vehicle, put her son in his car seat and was standing outside of the car when the police arrived. The arresting officer was short with my client and did not listen to her explanation.

Different paths to a great result

Sometimes, a great result can be attained for a client that does not result from either a trial or motion victory, but in hard work, alternative measures and vigorous lobbying of the prosecutor.

I recently had a case fit that scenario. I had a client who was charged with driving while suspended in the first degree.  Given his driving history, my client was facing a MINIMUM (which means the judge could not impose a shorter sentence) of 180 days (six months) of confinement.  Despite his history, my client had turned his life around to become a very productive and valuable asset to the community, having his own business and even having sole custody of his daughter.  Needless to say, a trip to the Clark County Jail for six months would have a devastating impact on his life and family.

I represented a mother accused of committing fourth-degree assault against her adult daughter. Facing false allegations from her daughter was painful enough, but the crime also carried a maximum penalty of 364 days in jail and a $5,000 fine.

Fortunately, on January 15 a Clark County District Court jury saw through the false allegations and found my client not guilty.