Attorney Roger Priest won an acquittal this week in Clark County District Court for a client charged with assaulting his former brother-in-law.

Proposed changes to how Clark County structures felony indigent defense services have been put on hold indefinitely, and a work group will study the issue, councilors agreed this week.

The county council had yet to discuss the proposal, however, and during a subsequent work session, councilors expressed concerns.

Council in no rush to make decision on indigent defense proposal

The Clark County Council heard more details Wednesday about a proposal to hire two defense attorneys to help with the felony indigent caseload, but didn’t reach any type of agreement.

Chairman Marc Boldt said they will continue the conversation during their Aug. 23 board time meeting.

Indigent Defense Manager Ann Christian and Bob Stevens, the county's director of general services, have proposed hiring two staff defense attorneys who, with Indigent Defense Coordinator Angela Colaiuta, would do felony work. They would have one part-time legal assistant. Stevens said Wednesday that Colaiuta would only spend a quarter of her time handling cases, and together the three attorneys would account for 14 percent of the felony caseload.

Wednesday’s work session was scheduled after councilors appeared to be caught off-guard by the original request and wanted more information, even after an initial discussion. About a dozen attorneys who have contracts with the county showed up to the work session, and the few who spoke -- Jeff Sowder, Heather Carroll and Therese Lavallee -- assured the councilors that, contrary to what they’ve been told by Christian and Stevens, there are plenty of attorneys willing to do the work.

A jury needed only about 15 minutes to deliberate before unanimously voting to acquit Barrar’s client of fourth-degree assault domestic violence, a gross misdemeanor punishable by up to one year in jail.

About three months ago, Barrar’s client’s girlfriend called 911 and told a Clark County Sheriff’s deputy that she had been assaulted by her boyfriend, who was arrested and had to spend the weekend in the Clark County Jail before he could see a judge and be released pending trial.

Kauffman wins another "not guilty" verdict

Attorney Katie Kauffman won an acquittal this week for a client and the stakes were extra high, as a criminal conviction could have created immigration problems for her client.

A jury deliberated about 30 minutes on Aug. 3 at the end of a daylong trial in Clark County District Court.

Kauffman's client was charged with assault in the fourth degree domestic violence, a gross misdemeanor that carries a maximum penalty of one year in jail. It's also an offense for which a person can be deported, and would have precluded her client from becoming a U.S. citizen.

Update: At the request of county staff, the work session has been set over one week, to 1 p.m. Aug. 16 in conference room 698 at the Public Service Center.

The Clark County Council has scheduled a work session to further explore the idea of creating a small public defender's office.

The session, which is open to the public, will be 1 p.m. Aug. 9 in conference room 698 at the Public Service Center. Councilors don't typically take public testimony at work sessions. Instead, it's a time for them to ask questions of staff members.

Defense attorneys who have contracts with the county to represent people who qualify for court-appointed counsel were initially told July 12 that the council was expected to approve the proposal and it would be effective Sept. 1. The issue hadn't yet been discussed with the council, however, and during a July 19 meeting the five members of the board said they wanted a work session and hear more about the proposal before advancing it to a public hearing and putting it to a vote.

The Columbian recently had an article on the proposal, and Chairman Marc Boldt said he and other councilors are wary of creating new staff positions.

The Clark County Council has hit “pause” on a proposal to start a county public defender’s office.

Last week, contract defense attorneys – who were wondering why the county hadn’t put out its usual calls for supplemental contracts to make sure felony cases would be covered through the end of the year – were told the county would be starting a small public defender’s office. The Clark County Council would approve the plan at its July 18 meeting and it would be effective Sept. 1. The county would hire two full-time attorneys to join its indigent defense coordinator in handling a portion of felony cases; the three attorneys would be assisted by a part-time legal assistant.

The day before the July 18 council meeting, Indigent Defense Manager Ann Christian pulled the item from the agenda and said it would be set over a week.

On July 19, Christian met with councilors and explained she pulled the request because she first wanted to meet with Clark County Superior Court judges. She said she met with the judges and answered their questions. She told councilors she would like her proposal to be on the July 25 agenda.

But that wasn’t the end of the discussion, and the proposal, which Christian emphasized to councilors was net neutral, won’t go to a vote July 25. Instead, the councilors first want a work session with Christian to have a broader discussion about indigent defense services. That work session has yet to be scheduled.

Update: On July 17, the item was pulled from the July 18 agenda and set over to the county council's July 25 meeting.

For the first time in nearly 40 years, Clark County will once again have a public defender’s office.

The title on the July 18 Clark County Council agenda sounds dull – “Request approval of the net neutral reorganization of the Indigent Defense Office” – but the action marks a significant shift in how the county meets its mandate to provide public defense services.

County councilors are expected to approve the proposal, which, according to a county staff report, has been vetted by the deputy county manager, the budget office director and the human resources director.

According to the report, the proposed reorganization is the first and second steps in a process “to change Clark County’s indigent (public) defense system from an exclusively independent contractor-based system to one with a strong base of attorney and paraprofessional county employee staff.”

The proposal adds two full-time attorneys and a part-time legal assistant to the indigent defense office, which currently oversees the private attorneys and law firms (including ours) that contract to provide legal services. Also, it reclassifies the current indigent defense coordinator position to a “senior public defender” who will take a partial felony caseload in addition to supervising the two new attorneys and keeping some of the current administrative tasks.

In all, that’s three county employees who will be defense attorneys. They will handle a total of 327 felony cases next year, or an estimated 13 percent of the felony caseload, and earn salaries comparable to deputy prosecuting attorneys.

A front-page story in the June 18 edition of The Columbian summarized our fight to get local judges to follow the 9th Circuit Court's ruling that routine pretrial shackling is a violation of the Fifth Amendment.

It also included quotes from our managing partner, Christie Emrich, who told the newspaper, "Our opinion is the 9th Circuit was very clear, and a judge needs to make a determination, an individualized decision regarding each defendant and whether or not that person should be in shackles and if there are less restrictive means."

Golik said the issue of whether an inmate should be shackled is up to the judge, but as a "partial solution" he's advocating for expanding video conferencing to Clark County Superior Court so inmates wouldn't have to be brought to court from the jail for first appearances and arraignments.

The article did not, however, address how much that might cost. Expanding the use of video conferencing would require substantial upgrades to an old jail, particularly for Superior Court matters when defendants are facing serious felony crimes and need access to their attorneys.

A day after we wrote about a Clark County judge saying the 9th Circuit ruling on routine pretrial shackling doesn't apply to Washington state courts ... well, we're not sure there's a consensus among our local elected judges at the courthouse. Even the judge who said the ruling didn't apply was unshackling defendants today.

On this morning's docket, presiding Clark County District Court Judge Kelli Osler called our attorney, Tim Murphy, up to the bench and told him that she planned to make rulings about each individual on the docket, per the 9th Circuit ruling. Murphy asked if that's what's going to happen from now on and Osler said she wasn't sure.

But in Clark County Superior Court, our attorney Katie Kauffman asked Judge Robert Lewis to make individual determinations about shackling and he said he wasn't going to do that because the 9th Circuit ruling wasn't applicable.

This afternoon, District Court Judge Darvin Zimmerman agreed to have custody officers unshackle a defendant who has no prior criminal history. Zimmerman was the judge who ordered defendants unshackled on June 12 but then changed his approach June 13 and said the ruling didn't apply.

Our firm is committed to seeing that the 9th Circuit's ruling, which said that routine pretrial shackling is a violation of the Fifth Amendment, is applied in Clark County courts.

In the meantime, please enjoy an editorial cartoon by one of our attorneys, Neil Anderson. 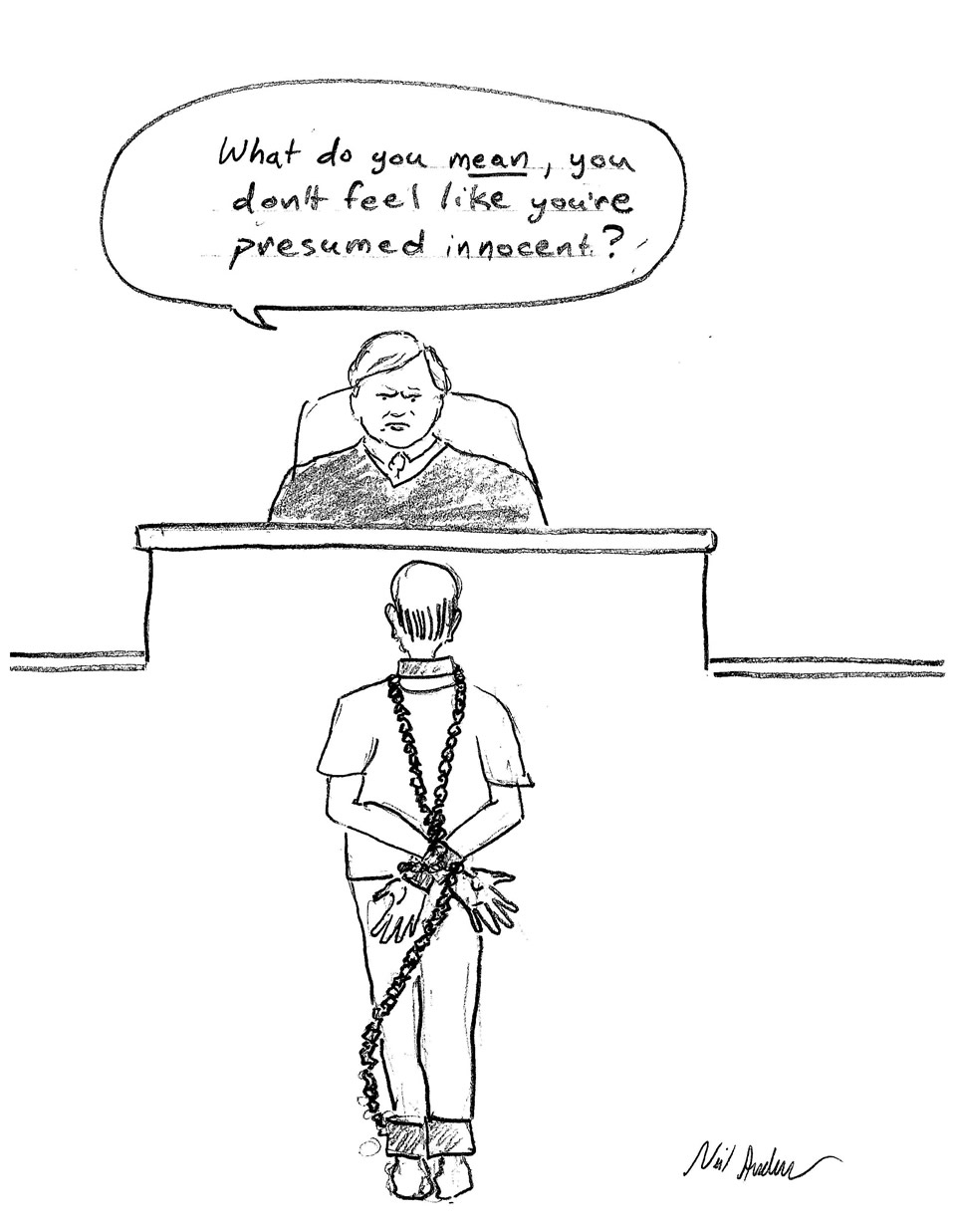